Releasing an idea out into the world can have a ripple effect. Your creations have the potential to impact others’ thoughts and actions in ways you might never imagine, but fear often holds us back from sharing. How many ideas have been squashed and rewards hidden because you gave into fear? Fear of judgment, fear of failure, fear of inadequacy.

Elizabeth Gilbert said, “Ideas are driven by a single impulse: to be made, manifest.” How long have you been sitting on your podcast idea? If you’re an avid podcast listener I can almost guarantee that a podcast has impacted, educated or influenced you in some way. It’s possible that your podcast could do the same for others. I sat on my idea for almost two years before bringing it to life. This is my story of the power of podcasting: how taking action can empower others—and yourself—along the way.

How I Discovered Podcasts

While podcasts are rather ubiquitous today, that wasn’t the case back in 2012. I had just moved to the young, active city of Austin, Texas, and decided to delve into the world of triathlons for the first time. I devoured the book “Finding Ultra” by Rich Roll, which chronicles his transformation from a self-described “mid-life couch potato to endurance machine.” Obsessed with his story, I learned that he was also starting a podcast—whatever that was. I Googled “how to listen to a podcast,” found the iTunes app (now Apple Podcasts) on my phone, and listened to my first-ever podcast episode of the Rich Roll podcast.

A Podcast Superfan In the Making

I quickly became a superfan. Hearing from a “superhuman” like Rich on a weekly basis gave me a much more intimate look into his life than through the pages of a book, which had a big impact on me. Roll was complex, flawed, nuanced, and consistent in his message of empowering listeners to become their best, most authentic selves. He inspired me to make better health and wellness choices, introduced me to a whole new world of high-performers and thought leaders, and further expanded my realm of possibilities.

Roll started the podcast on a whim as an experimental creative outlet— one that is still going strong seven years later with almost 500 episodes.

And Then There Was Tim

Burned out after writing a 700-page book, “The Four-Hour Work Week,” Ferriss was looking for a “casual but creative break from big projects.” After sitting on the idea of podcasting for two years, he decided to give it a shot. What started out as a six-episode experiment turned into The Tim Ferriss Show, one of the most popular podcasts in the world with over 400 million downloads!

Once again, I discovered one of my new favorite podcasters after reading their book. Like Rich Roll, Ferriss introduced novel concepts ranging from health, wealth, business, and time-management, to relationships and more.

From Austin to Madrid

These two podcasts impacted me in a big way. Rich Roll helped me adapt to Austin’s health and wellness lifestyle, like getting produce from local farms, participating in marathons and triathlons, and developing a dedicated yoga and meditation practice. Tim Ferriss, however, planted the seed for a bigger lifestyle change; maybe working 9 to 5 wasn’t the only path available. Maybe I could create a life I loved, even if it was a bit unconventional. So at 35 years old, I took a leap, quit my job, and moved to Madrid, Spain.

Fast forward a few years later. I transitioned from teaching English to working remotely, a huge step toward building my dream life in Spain. My new work-from-home gig inspired me to listen to podcasts related to digital nomadism. I stumbled upon another lifechanging podcast for remote workers, Workationing Podcast.

My ears perked up when I heard hosts Kari and Kelly sharing their stories; they had ditched their apartments, left a boyfriend, and temporarily abandoned their American lives for a life of international adventure. They already had remote jobs, so why not? This is exactly what I was looking for! I immediately devoured the highly entertaining podcast chronicling their “gringa” workation journey through Mexico, Colombia, and Europe.

Just a few weeks into my new job playing Workationing as my soundtrack, I started imagining my own life on the road. I already had extensive experience living and traveling abroad and now I was location independent. I didn’t have to wait until the next holiday to take time off. I could take my work with me.

Summer was approaching—my favorite season to explore Europe—and I was feeling inspired by the new gringas in my life. I quickly decided to put my work autonomy to the test and try out my own workation.

My Very Own Workation

It was time to hit the road. But where would I go? With my sole requirement being reliable Wi-Fi, I embarked on a five-week trip through Europe: Croatia, Slovenia, Italy, Switzerland, and Germany. Solo backpacking after so many years had passed was thrilling!

But, this wasn’t a vacation. Combining work and travel was stressful at times. I often had to chase remote worker necessities: hotels didn’t have strong Wi-Fi as they claimed, bedrooms had outlets in inconvenient places, and early train/bus/boat rides cut into my work hours. Despite those challenges, life on the road had its perks, like dipping into the Adriatic Sea in Hvar during lunch, strolling through the ancient Roman Palace in Split after a long workday, and watching families enjoy the simplicities of life at Lake Bled in Slovenia.

A breakthrough came in Italy when a friend from Austin visited. Annette had just taken a sabbatical in her early 40s. She was traveling around Europe for three months while pondering her next move. Sharing my fandom Workationing, we realized there wasn’t a platform for women like us, women who had made major life changes “later in life.”

Many online travel resources were geared toward students and 20-somethings who are interested in short-term travel. Workationing focused on the digital nomad lifestyle and the hosts were a bit younger than us. There was a gap of information for women of a certain age who wanted to radically change their life through travel, who wanted to move abroad or take a sabbatical. Here came our “aha moment” – let’s start a podcast!

Nothing Happens Without Action

We quickly realized that starting a podcast takes a lot of work, so we didn’t. However, Annette and I were sitting on a wealth of personal experience and we were so excited about the idea of helping other women “hit refresh” like we had. Our friends were curious to know how and why we did it, so surely there were other women out there who wanted to know, too?

I’m a doer, so I channeled all of my excitement and energy into a new Facebook group: She Hit Refresh.

The Birth of She Hit Refresh

Even though I didn’t know exactly what I was doing, I was determined to make this idea a reality. I couldn’t sit on it any longer. Everything about starting a Facebook group felt right. Plus my newest podcast guru, Gary Vaynerchuk, preached daily that the path to success is through action. I pushed the fear of failure and judgment aside and dove right in.

I had a clear vision for the community: A community for women 30 and over who want to break free from routine and start a life of travel. In its infancy, we only invited women we knew personally, but the community grew by word of mouth, and quickly expanded around the world.

Members soon demanded more resources and wanted to meet in-person, so we started a blog and began hosting meetups in Madrid. Members asked if we had considered a retreat, so we put something together and announced our first retreat in Morocco. We put our idea out there, and with lots of nurturing it began to take on a life of its own.

The Impact of Action

Starting She Hit Refresh taught me an extraordinary lesson in action-taking. We started our Facebook group imperfectly; we didn’t have a logo, graphics or brand colors. We weren’t even a brand; we were just an idea. None of those things are important. What matters is putting an idea out there, taking action, and building momentum. Action leads to impact. Research, planning, designing, and discussing an idea to perfection, are often excuses for delaying taking action. I’m so grateful I just started.

Here’s what we’ve accomplished since starting the group in 2017:

By bringing my ideas to life, I reinvented myself as a leader, community builder, creator, and subject matter expert. My identity was forever changed.

The She Hit Refresh Podcast

I finally started the She Hit Refresh podcast about a year ago. I was overwhelmed by the technology required. Then I heard about Anchor, a podcasting platform. Honestly, I didn’t do much research, so I’m not sure if it was the best option, but it was certainly the easiest. The doer in me decided to just start. Tim Ferriss-style, I committed to recording six episodes. One year later we’re wrapping up season two with 27 podcast episodes out, and I can already see the impact the show has on listeners!

Here is just some of the feedback we’ve received!

Read Next: 10 Travel Podcasts by Women of Color

Looking back at my favorite podcasters like Rich Roll, Tim Ferriss, Gary Vee, and Kari and Kelly, they all started their podcasts as an experiment—that is, far from perfect. Their need to create, to scratch an itch, and share a part of their journey with whoever would listen was greater than their fear, and I’m forever grateful for that. Each one of them played a small role in the decisions I have made over the years, ones that altered the course of my own journey.

My story is just one example of how art has influenced my life, which in turn helped me be of service to others. Too many people sit on their ideas, trapped in their minds and paralyzed by fear. This is a disservice; not only does it dim your light, but it also limits the potential of others. There is power in podcasting, creation, and action-taking. Ideas put into motion have a ripple effect. What will yours be?

Did you enjoy this article? Read how Akeele Hughes turned her vision into an action plan.

Born a citizen of the world to a Colombian mother and Iranian father, Cepee grew up in Houston, Texas and now calls Madrid, Spain home. She is a social media marketer and community builder. In 2017, she founded She Hit Refresh, an online community for women 30 and over who want to break free from routine and start a life of travel. The community has grown to over 5,000 members worldwide and has expanded its reach through a blog, meetups, annual retreat and a podcast that was launched in 2019. 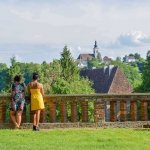 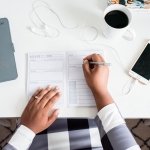